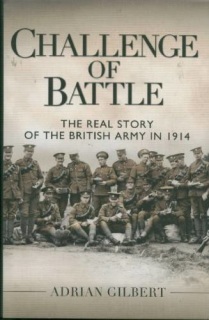 UK 1st edition 1st impression hardback in an unclipped wrap
Published by Osprey in 2014
The wrap is fine.
The book is fine, new and unread. Pushed slightly at the head.
The titanic clash of Europe's armies in 1914 is one in which the British Expeditionary Force  played a notable part. Previous assessments of the BEF have held to a belief in its exceptional performance during the battles of 1914. But closer examination of the historical record reveals a force possessing some key strengths yet undermined by other, significant failings. Challenge of Battle re-evaluates the Army's leadership, organization and tactics. It describes the problems faced by commanders, grappling with the brutal realities of 20th-century warfare, and explains how the British infantry's famed marksmanship has to be set against the inexperience and tactical shortcomings of the BEF as a whole. However, it also demonstrates the progress made by the British during 1914, concluding with the successful defence of Ypres against superior enemy forces. 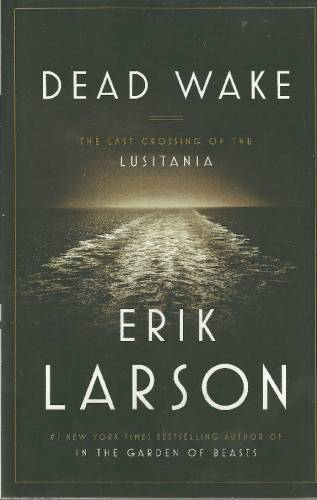 The wrap is vg+ with light shelfwear

On May 1, 1915, with WWI entering its tenth month, a luxury ocean liner as richly appointed as an English country house sailed out of New York, bound for Liverpool, carrying a record number of children and infants. The passengers were surprisingly at ease, even though Germany had declared the seas around Britain to be a war zone. For months, German U-boats had brought terror to the North Atlantic. But the Lusitania was one of the era's great transatlantic "Greyhounds"--the fastest liner then in service--and her captain, William Thomas Turner, placed tremendous faith in the gentlemanly strictures of warfare that for a century had kept civilian ships safe from attack.

Germany, however, was determined to change the rules of the game, and Walther Schwieger, the captain of Unterseeboot-20, was happy to oblige. Meanwhile, an ultra-secret British intelligence unit tracked Schwieger's U-boat, but told no one. As U-20 and the Lusitania made their way toward Liverpool, an array of forces both grand and achingly small--hubris, a chance fog, a closely guarded secret, and more--all converged to produce one of the great disasters of history. 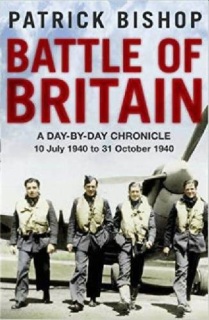 After the fall of France in 1940, Hitler turned his attention to Germany's sole remaining enemy: Great Britain. His plans to invade Britain depended on crippling Britain's Royal Air Force. In July the Luftwaffe, the German air force, began its attempt to bomb Britain into submission - the resulting conflict was known as the Battle of Britain. Acclaimed historian Patrick Bishop is ideally placed to tell the story of Britain's fight for national survival. Battle of Britain offers a concise, day-by-day narrative account of the battle along with illustrations, eye-witness accounts, documents, posters and timelines. Every aspect of the battle is covered from multiple points of view providing a unique and gripping account of the battle, the men and women who fought it, and the world of the 1940s. Numerous and fascinating aspects of the conflict are discussed: aircraft and aircraft specifications; RAF Fighter Command order of battle; Luftwaffe order of battle; RAF Fighter Command groups; squadrons; commanders; meteorological conditions; plane and pilot casualties; ace flyers and their kill rates; navigation aids; myths, stories and the legend of 'the few'. 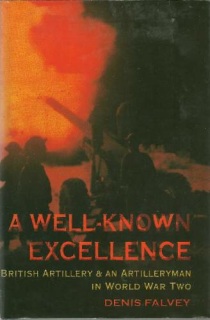 The wrap is fine with some light shelfwear.

The book is fine with a few caught pages. It appears unread.

Even Field Marshal Erwin Rommel, Germany's most accomplished battlefield general and scourge of the British soldier, recognised the British artillery as masters of their craft and it is apt that his words are used in the title of this absorbing military autobiography. The author, now 92, fought in all European theatres and took part in the Normandy landings; the book follows his war from enlistment to demobilisation and offers very much more than a simple account of life in various battlezones. Uniquely it includes a critical assessment of Claude Auchinleck, C-in-C Middle East and often referred to as the 'soldier's soldier' and describes the role and function of the artillery in World War Two. The result is a descriptive memoir offering a treasured insight into the workings of an artilleryman at war, including equipment, tactics, and the dramas of the battlefield. 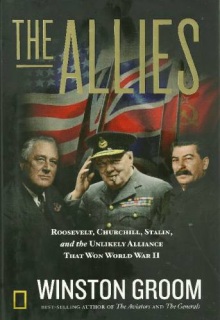 Published by National Geographic in 2018.

The book is fine and appears unread. Pushed at the tail.

Signed on the title page with no inscription or dedication

By the end of World War II, 59 nations were arrayed against the axis powers, but three great Allied leaders--Franklin Roosevelt, Winston Churchill, and Joseph Stalin--had emerged to control the war in Europe and the Pacific. Vastly different in upbringing and political beliefs, they were not always in agreement--or even on good terms. But in the end, these three men presided over a new world order. 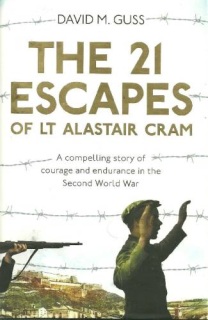 Published by Macmillan in 2018.

A genuinely new Second World War story, this is a riveting account of the wartime exploits of Alastair Cram, brilliantly told by the American author, David Guss. Cram was taken prisoner in North Africa in November 1941, which began a long odyssey through twelve different POW camps, three Gestapo prisons and one asylum. He became a serial escapee – fleeing his captors no fewer than twenty-one times, including his final, and finally successful, escape from a POW column in April 1945.

Perhaps the most dramatic of his attempts was from Gavi, the ‘Italian Colditz’. Gavi was a maximum-security prison near Genoa for the pericolosi, the ‘most dangerous’ inmates because of their perpetual hunger to escape. It was here that Alastair met David Stirling, the legendary founder of the SAS, and cooked up the plan for what would become the ‘Cistern Tunnel’ escape, one of the most audacious but hitherto little-known mass escape attempts of the entire war. 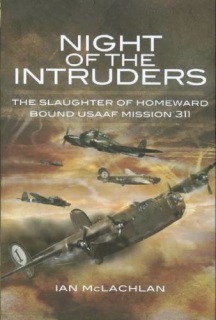 Night of the Intruders: Ian McLachlan
ISBN 9781848842946
UK reprint in an unclipped wrap.
Originally published by Patrick Stephens in 1994.
Published by Pen & Sword in 2010.
The wrap is fine.
The book is fine, new and unread.
This is the full account of USAAF Mission 311 on 22 April 1944 when American bombers suffered their highest ever loss to German intruders. The German fighters followed the air armada home after the raid, picking individual bombers off on their return over Europe and then over England as the American force struggled to land. The book covers many famous USAAF, RAF and Luftwaffe units and describes the ferocious action over Europe when the Americans attacked Germany's largest railway marshalling yards at Hamm. Packed with powerful human interest stories, history and technical details, it chronicles the mission fully from the initial planning stage to its bloody finale, untangling the facts behind what went so horribly wrong and why sixty bomber crewmen and ground personnellost their lives owing to intruder action. 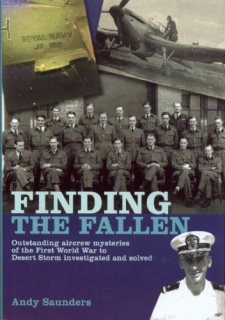 Andy Saunders : Finding The Fallen
ISBN 9781908117106
UK 1st edition 1st impression in an unclipped wrap
Published by Grub Street in 2011.
The wrap is fine.
The book is fine, new and unread.
The logical successor to the highly acclaimed "Finding the Few" and "Finding the Foe", this new work covers a selection of similar mysteries involving missing aircrew and spanning almost the entire twentieth century. Starting with a re-appraisal of the Mannock affair, the author highlights the fates variously of RAF, USAF, Luftwaffe personnel from bomber, reconnaissance and fighter crews. Each case is examined with a microscopic and forensic approach worthy of 'Silent Witness', and evaluates the detective work involved in unravelling these long-unsolved disappearances of lost airmen. In many cases there is a satisfactory conclusion with 'closure' achieved - although some question marks are left hanging unanswered over other equally fascinating cases. 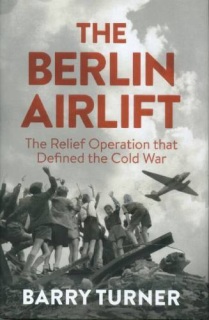 Barry Turner: The Berlin Airlift
ISBN 9781785782404
UK 1st print 1st impression hardback in an unclipped wrap.
Published by Icon Books in 2017.
The wrap is fine.
The book is fine, new and unread.
Berlin, 1948 – a divided city in a divided country in a divided Europe. The ruined German capital lay 120 miles inside Soviet-controlled eastern Germany. Stalin wanted the Allies out; the Allies were determined to stay, but had only three narrow air corridors linking the city to the West. Stalin was confident he could crush Berlin’s resolve by cutting off food and fuel.
In the USA, despite some voices still urging ‘America first’, it was believed that a rebuilt Germany was the best insurance against the spread of communism across Europe.
And so over eleven months from June 1948 to May 1949, British and American aircraft carried out the most ambitious airborne relief operation ever mounted, flying over 2 million tons of supplies on almost 300,000 flights to save a beleaguered Berlin.
With new material from American, British and German archives and original interviews with veterans, Turner paints a fresh, vivid picture the airlift, whose repercussions – the role of the USA as global leader, German ascendancy, Russian threat – we are still living with today. 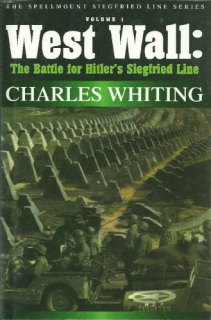 The wrap is vg with some light shelfwear and edge creasing.

The book is near fine with a bumped head. It appears unread. Edges creamed.

Nearly 80 years after Adolf Hitler ordered its construction, the West Wall fortification system (or "Siegfried Line" as it was known in Britain) still survives. Overcoming the West Wall and the numerous river and forest obstacles integral to it was the culminating campaign of World War II in Europe. Six months of fighting along a 350-mile front left 250,000 American, British, Canadian and French casualties.Best-selling World War II historian Charles Whiting served in an armored reconnaissance regiment that was attached to both British and American units during the campaign. His comprehensive coverage of the West Wall battles will be the first to recognize them as part of a single grand campaign.Charles Whiting's vivid account brings to life not only the massive armies of the campaign but the famous personalities like George Patton, Bernard Montgomery, Omar Bradley and Walther Model who took part in the struggle for the West Wall. Whiting is an authority on Ernest Hemingway's wartime career and many will be surprised at how large a role the famous author, theoretically just a war correspondent, played in the campaign. West Wall's detailed text is backed up by 32 photos, 5 maps, a bibliography, and an appendix with little-known information about the final fate of the battle's leading participants. 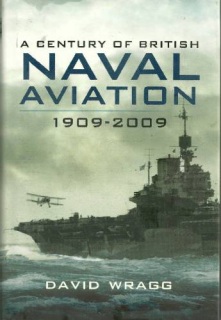 The history of the first century of British Naval aviation, with personal accounts adding colour to the achievements both in technology, such as angled flight decks, mirror deck landing systems, helicopter assault and vertical take-off, and in operations, including the sinking of the Konigsberg and the daring attack on the Italian fleet at Taranto, convoy protection, operations with the United States Navy in the Pacific, then, post-war, Suez, and later the recovery of the Falklands from Argentine invasion. The Royal Navy was in the forefront of aviation from a very early stage. As the author reveals Officers such as the legendary Admiral of the Fleet Lord Fisher quickly recognised the strategic and tactical importance of air power. Winston Churchill, as First Lord of the Admiralty, volunteered the Navy for the air defence of the UK in WW1 but with the formation of the RAF in 1918 the Navy had a fierce fight to retain its own air arms and this is a struggle that has continued up to the present day.