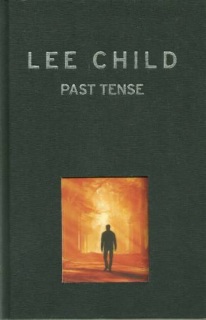 Published by Bantam in 2018

A very rare hardback proof, one of only 100 printed. 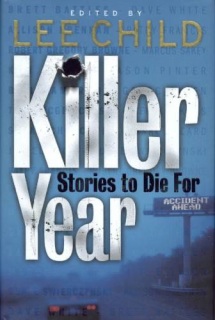 The wrap is fine with some very light shelf wear.

The book is fine, new and unread. Head and tail pushed

This volume includes stories to die for...from the hottest new crime writers.The Killer Year are a group of new and up-coming thriller writers who have turned their talents to this compelling new collection. Each author has been mentored along the way by some of the biggest names in thriller fiction and there are special introductions to all the stories from authors, including: Jeffrey Deaver; Lee Child; Tess Gerritsen; James Rollins; and, David Morrel.With a special afterword from Laura Lippman included, this pulse-pounding anthology is sure to keep you coming back for more. The highly acclaimed Killer Year features One Serving of Bad Luck, winner of the 2009 Crime Writers Association Short Story Dagger Award, and is written by exciting new thriller author, Sean Chercover. 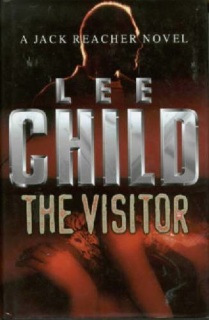 Lee Child: The Visitor. signed
ISBN 9780593043998
UK 1st edition 1st impression hardback in a price clipped wrap.
Published by Bantam in 2000.
The wrap is vg with edge creasing and a small 15mm tear to the top front/inside wrap join.
The book is near fine with head and tail  pushed, and tanned edges.
Signed on the title page with no inscriptions or dedications.

Before Jack Reacher became a wanderer, stumbling into desperate situations and sorting them out with his two fists and sharp brain, he used his skill for the US Army's military police. When he is accused of a series of killings--women who left the army after sexual harassment proceedings found with their hearts stopped in baths full of camouflage paint--he has to use his skills to clear his name, and to do the Army and FBI's work for them. 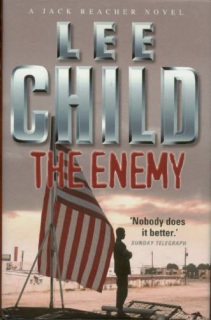 UK 1st edition 1st impression hardback in an unclipped wrap.
Published by Bantam in 2004.
The wrap is vg+ with edge creasing..
The book is vg with a small bump to the bottom rear corner. Edges browned.
Signed on the title page. No inscriptions or dedication.
New Year's Day, 1990. The Berlin Wall is coming down. Soon America won't have any enemies left to fight. The army is under pressure to downsize. Jack Reacher is the duty Military Police officer on a base in North Carolina when he takes a call reporting a dead soldier. The body was found in a sleazy motel used by local hookers. Reacher tells the local cop to handle it - it sounds like the guy just had a heart attack. But the dead man turns out to have been a two-star general on a secret mission. And then, many miles away, when Reacher goes to the general's house to break the sad news, he finds a battered corpse: the general's wife. 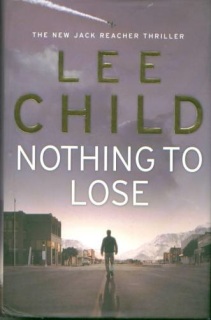 Lee Child: Nothing To Lose. signed
ISBN 9780593057025
UK 1st edition 1st impression hardback in an unclipped wrap
Published by Bantam in 2008.
The wrap is near fine with some edge creasing
The book is near fine with a small bump to the top front corner and a pushed tail. Edges lightly tanned.
Signed on the title page with no other inscription or dedication.
Two small towns in Colorado: Hope and Despair. Between them, nothing but twelve miles of empty road. Jack Reacher can't find a ride, so he walks. All he wants is a cup of coffee. What he gets are four redneck deputies who want to run him out of town. Mistake. They're picking on the wrong guy. Jack Reacher is a big man, and he's in shape. No job, no address, no baggage. Nothing, except bloody-minded curiosity. What is the secret the locals seem so keen to hide? A hard man is good to find. Ex-military cop Reacher is today's most addictive hero. Now he pulls on a tiny loose thread, to unravel conspiracies that expose the most shocking truths. Because, after all, Jack Reacher has nothing to lose. 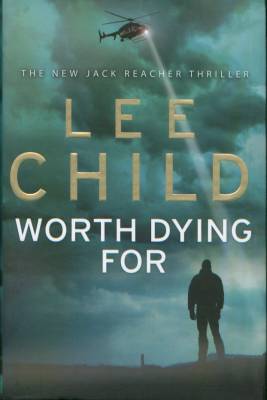 Lee Child: Worth Dying For. signed
ISBN 9780593065662
UK 1st edition 1st impression hardback in an unclipped wrap
Published by Bantam in 2010.
The wrap is fine.
The book is fine, new and unread.
Signed on the title page with no inscriptions or dedications.

Reacher walks right into deadly trouble in the wilds of Nebraska.  First he falls foul of the Duncans, a local clan that has terrified an entire county into submission. But it's the unsolved case of a missing eight-year-old girl, already decades-old, that Reacher can't let go.
The Duncans want Reacher gone-or dead. And it's not just past secrets they're trying to hide. They're awaiting a secret shipment that's already late-and they have the kind of customers no one can afford to annoy. For as dangerous as the Duncans are, they're just the bottom of a criminal chain stretching halfway around the world. 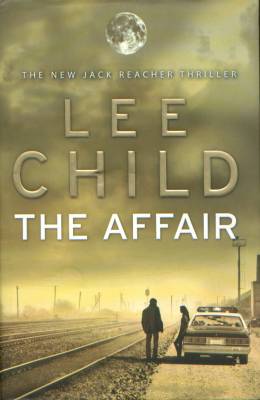 UK 1st edition 1st impression hardback in an unclipped wrap.
Published by Bantam in 2011.
The wrap is fine.
The book is fine, new and unread. Just the hint of a bump to the top front corner.
Signed on the title page with no other inscription or dedication.
March 1997. A woman has her throat cut behind a bar in Carter Crossing, Mississippi. Just down the road is a big army base.Is the murderer a local guy - or is he a soldier?
Jack Reacher, still a major in the military police, is sent in undercover.The county sheriff is a former U.S. Marine - and a stunningly beautiful woman. Her investigation is going nowhere. Is the Pentagon stonewalling her? Or doesn't she really want to find the killer?
The adrenaline-pumping, high-voltage action in The Affair is set just six months before the opening of Killing Floor, and it marks a turning point in Reacher's career. 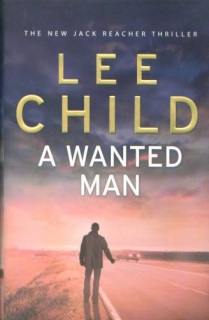 Lee Child: A Wanted Man. signed
ISBN 9780593065730
UK 1st edition 1st impression hardback in an unclipped wrap.
Published by Bantam in 2012.
The wrap is fine.
The book is near fine, slightly cocked and edges creamed.
Signed on the title page with no other inscription or dedication.

When you're as big and rough as Jack Reacher - and you have a badly-set, freshly-busted nose, patched with silver duct tape - it isn't easy to hitch a ride. But Reacher has some unfinished business in Virginia, so he doesn't quit. And at last, he's picked up by three strangers - two men and a woman.
But within minutes it becomes clear they're all lying about everything - and then they run into a police roadblock on the highway. There has been an incident, and the cops are looking for the bad guys ... Will they get through because the three are innocent? Or because the three are now four? Is Reacher just a decoy? 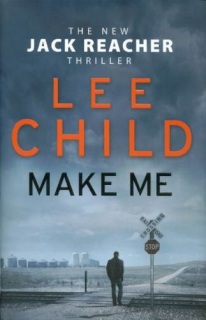 UK 1st edition 1st impression hardback in an unclipped wrap.
Published by Bantam in 2015.
The wrap is fine with some very light edge wear
The book is vg. Slightly cocked.
Signed on tne title page with no other inscription or dedication.

Jack Reacher has no place to go, and all the time in the world to get there, so a remote railroad stop on the prairie with the curious name of Mother's Rest seems perfect for an aimless one-day stopover.
He expects to find a lonely pioneer tombstone in a sea of nearly-ripe wheat ... but instead there is a woman waiting for a missing colleague, a cryptic note about two hundred deaths, and a small town full of silent, watchful people.
Reacher’s one-day stopover becomes an open-ended quest...into the heart of darkness. Prepare to be nailed to your seat by another hair-raising, heart-pounding adventure from the kick ass master of the thriller genre 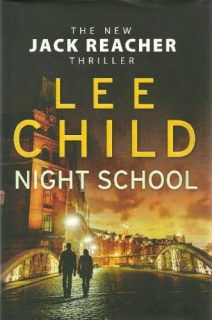 The wrap is near fine with some light edge wrinkling.

The book is near fine with the head pushed and is slightly cocked.

It’s just a voice plucked from the air: ‘The American wants a hundred million dollars’.

For what? Who from? It’s 1996, and the Soviets are long gone. But now there’s a new enemy. In an apartment in Hamburg, a group of smartly-dressed young Saudis are planning something big.

In the morning they gave Reacher a medal, and in the afternoon they sent him back to school.

Jack Reacher is fresh off a secret mission. The Army pats him on the back and sends him to a school with only three students: Reacher, an FBI agent, and a CIA analyst. Their assignment? To find that American. And what he’s selling. And to whom. There is serious shit going on, signs of a world gone mad. 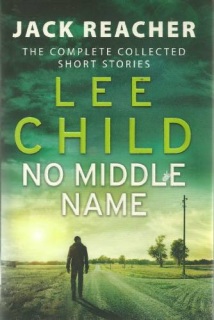 Jack 'No Middle Name' Reacher, lone wolf, knight errant, ex military cop, lover of women, scourge of the wicked and righter of wrongs, is the most iconic hero for our age. This is the first time all Lee Child's shorter fiction featuring Jack Reacher has been collected into one volume. Read together, these twelve stories shed new light on Reacher’s past, illuminating how he grew up and developed into the wandering avenger who has captured the imagination of millions around the world.

The twelve stories include a brand new novella, Too Much Time. 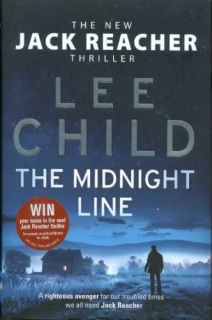 Jack Reacher takes an aimless stroll past a pawn shop in a small Midwestern town. In the window he sees a West Point class ring from 2005. It’s tiny. It’s a woman cadet’s graduation present to herself. Why would she give it up? Reacher’s a West Pointer too, and he knows what she went through to get it.

Reacher tracks the ring back to its owner, step by step, down a criminal trail leading west. Like Big Foot come out of the forest, he arrives in the deserted wilds of Wyoming. All he wants is to find the woman. If she’s OK, he’ll walk away. If she’s not … he’ll stop at nothing.

He’s still shaken by the recent horrors of Make Me, and now The Midnight Line sees him set on a raw and elemental quest for simple justice. Best advice: don’t get in his way.