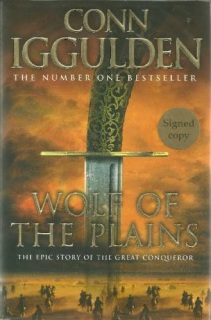 Published by Harper Collins in 2007.

'I am the land and the bones of the hills. I am the winter.'

Temujin, the second son of the khan of the Wolves tribe, was only eleven when his father died in an ambush. His family were thrown out of the tribe and left alone, without food or shelter, to starve to death on the harsh Mongolian plains.

It was a rough introduction to his life, to a sudden adult world, but Temujin survived, learning to combat natural and human threats. A man, a small family, without a tribe was always at risk but he gathered other outsiders to him, creating a new tribal identity. It was during some of his worst times that the image of uniting the warring tribes and bringing the silver people together came to him. He will become the khan of the sea of grass, Genghis. 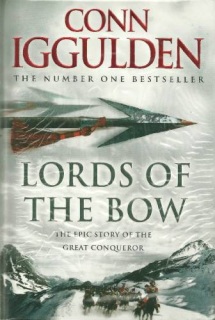 The gathering of the tribes of the Mongols has been a long time in coming but finally, triumphantly, Temujin of the Wolves, Genghis Khan, is given the full accolade of the overall leader and their oaths. Now he can begin to meld all the previously warring people into one army, one nation. But the task Genghis has set himself and them is formidable. He is determined to travel to the land of the long-time enemy, the Chin and attack them there. The distances and terrain-the wide deserts, the impenetrable mountains-make it a difficult venture even for the legendary Mongolian speed of movement, but the greatest problem is that of the complex fortifications, a way of fighting wars of a settled urban population which the nomadic Mongolians had never come across. Finding ways to tackle that and keeping his tribes together in a strange environment presents another new and exciting challenge for Genghis Khan.

Not only must Genghis succeed in this incredible campaign, but he must also reconcile the restless factions among his own generals, mediate between his ambitious brothers and cope with his own reactions to his growing sons. The young warrior has become a notable and victorious military commander of thousands: he must now learn to become a great leader of peoples of many different races and religions. 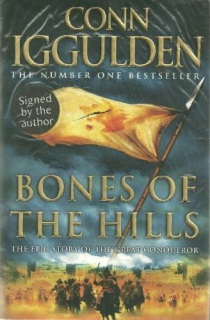 The fatherless boy, exiled from his tribe, whom readers have been following in 'Wolf of the Plains' and 'Lords of the Bow', has grown into the great king, Genghis Khan. He has united the warring tribes and even taken his armies against the great cities of their oldest enemies. Now he finds trouble rising west of the Mongolian plains. His emissaries are mutilated or killed; his trading gestures rebuffed. So, dividing his armies, using his sons as generals of the various divisions, he sends them out simultaneously in many directions, ranging as far as modern Iran and Iraq.As well as discovering new territories, exacting tribute from conquered peoples, laying waste the cities which resist, this policy is also a way of diffusing the rivalries between his sons and heirs and working out who should succeed the khan. 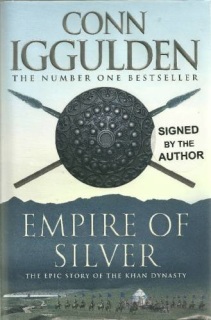 Published by Harper Collins in 2010.

Genghis Khan is dead, but his legend and his legacy live on. His son Ogedai has built a white city on a great plain and made a capital for the new nation. Now the armies have gathered to see which of Genghis' sons has the strength to be khan. The Mongol empire has been at peace for two years, but whoever survives will face the formidable might of their great enemy, China’s Song dynasty.

The great leader Tsubodai sweeps into the west: through Russia, over the Carpathian mountains and into Hungary. The Templar knights have been broken and there is no king or army to stop him reaching France. But at the moment of Tsubodai's greatest triumph, as his furthest scouts reach the northern mountains of Italy, Tsubodai must make a decision that will change the course of history forever. 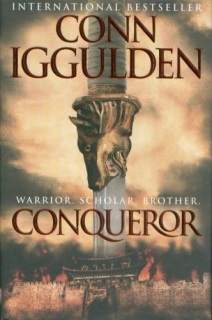 Published by Harper Collins in 2011.

A scholar who conquered an empire larger than those of Alexander or Caesar.

A warrior who would rule a fifth of the world with strength and wisdom.

A man who betrayed a brother to protect a nation.

From a young scholar to one of history’s most powerful warriors, Conqueror tells the story of Kublai Khan – an extraordinary man who should be remembered alongside Julius Caesar, Alexander the Great and Napoleon Bonaparte as one of the greatest conquerors the world has ever known.

It should have been a golden age, with an empire to dwarf the lands won by the mighty Genghis Khan. Instead, the vast Mongol nation is slowly losing ground, swallowed whole by their most ancient enemy. A new generation has arisen, yet the long shadow of the Great Khan still hangs over them all …

Kublai dreams of an empire stretching from sea to sea. But to see it built, this scholar must first learn the art of war. He must take his nation’s warriors to the ends of the known world. And when he is weary, when he is wounded, he must face his own brothers in bloody civil war. 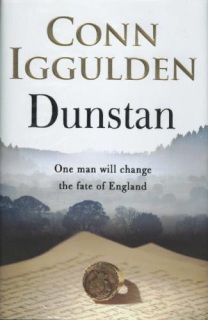 Published by Michael Joseph in 2017.

In the year 937, King Æthelstan, grandson of Alfred the Great, readies himself to throw a great spear into the north. His dream of a kingdom of all England will stand or fall on one field and the passage of a single day.

At his side is Dunstan of Glastonbury, full of ambition and wit, perhaps enough to damn his soul. His talents will take him from the villages of Wessex to the royal court, to the hills of Rome - from exile to exaltation.

Through Dunstan's vision, by his guiding hand, England may come together as one great country - or fall back into anarchy and misrule . . .

From one of our finest historical writers, Dunstan is an intimate portrait of a priest and performer, a visionary, a traitor and confessor to kings - the man who changed the fate of England. 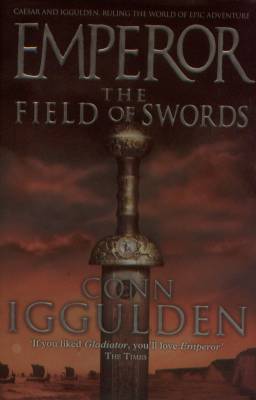 Conn Iggulden: The Field of Swords. signed
ISBN 9780007136933
UK 1st edition 1st impression hardback in a clipped wrap.
Published by Harper Collins in 2005.
The wrap is fine with some light edge creasing. A small chip on the front top corner..
The book is fine, pushed head and tail. Edges creamed.
Signed on the title page with no inscription or dedication.
Following the defeat of the Spartacus rebellion, Julius Caesar and Marcus Brutus, who have been sent to run the Roman colonies in Spain, return to challenge powerful senators to make Caesar one of the Consuls of Rome. Political opposition, family quarrels, armed rebellions and corruption make this a highly contemporary scene, fuelled by the intrigue of the major characters, who are now developing as full adults.