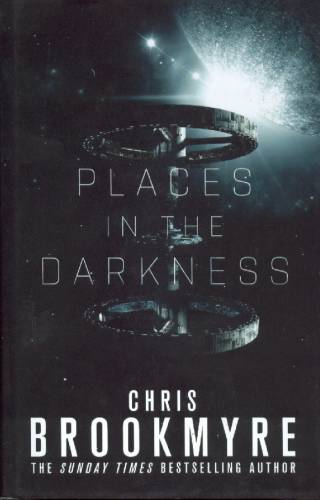 Chris Brookmyre: Places In The Darkness.

The book is fine. Head pushed.

"This is as close to a city without crime as mankind has ever seen."

Ciudad de Cielo is the 'city in the sky', a space station where hundreds of scientists and engineers work in earth's orbit, building the colony ship that will one day take humanity to the stars.

When a mutilated body is found on the CdC, the eyes of the world are watching. Top-of the-class investigator, Alice Blake, is sent from Earth to team up with CdC's Freeman - a jaded cop with more reason than most to distrust such planetside interference.

As the death toll climbs and factions aboard the station become more and more fractious, Freeman and Blake will discover clues to a conspiracy that threatens not only their own lives, but the future of humanity itself. 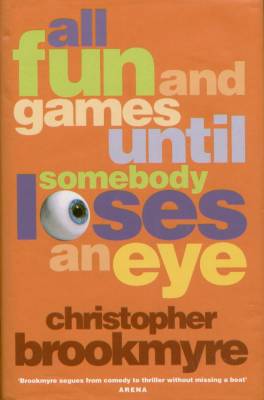 The wrap is fine with a little light edge creasing.

The book is fine, slightly creamed edges and a slightly pushed head.

When someone tries to kidnap Jane Fleming's grand-daughter, she responds with inventive viciousness; told to save her family by making a South of France rendezvous, she steals passports, cars and tickets as if she has always been doing it. Recruited merely as an expert on a missing boffin who happens to be her son, Jane demonstrates that the quiet desperation of ordinary life is the best training a super agent could have.. 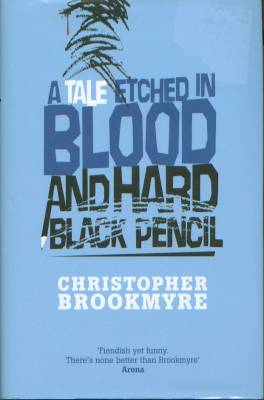 Christopher Brookmyre: A Tale Etched In Blood & Black Pencil. signed
ISBN 9780316730105
UK 1st edition 1st impression hardback in an unclipped wrap.
Published by Little, Brown in 2006.
The wrap is fine with some light edge creasing.
The book is fine, new and unread.
Signed on the title page with no inscription or dedication.
.Put on your uniform and line up in an orderly fashion for the funniest and most accurate trip back to the classroom you are likely to read, as well as a murder mystery like nothing that has gone before it. Forget the forensics: only once you've been through school with this painfully believable cast of characters will you be equipped to work out what really happened decades later. Even then, you'll probably guess wrong and be made to stand in the corner. 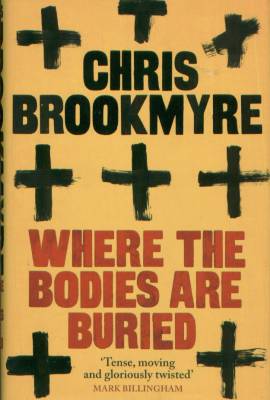 Chris Brookmyre: Where The Bodies Are Buried. signed.
ISBN 9781408702697
UK 1st edition 1st impression hardback in an unclipped wrap.
Published by Little, Brown in 2011.
The wrap is fine.
The book is fine.
Signed on the title page with no inscription or dedication.
Detective Catherine McLeod was always taught that in Glasgow, they don't do whodunit. They do score-settling. They do vendettas. They do petty revenge. They do can't-miss-whodunit. It's a lesson that has served her well, but Glasgow is also a dangerous place to make assumptions. Either way she looks at it, she recognises that the discovery of a dead drug-dealer in a back alley is merely a portent of further deaths to come. Elsewhere in the city, aspiring actress Jasmine Sharp is reluctantly - and incompetently - earning a crust working for her uncle Jim's private investigation business. 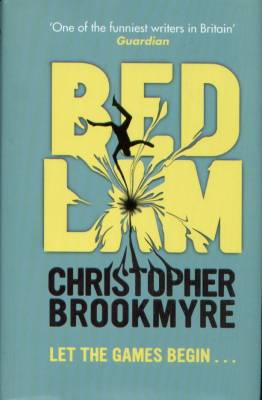 Christopher Brookmyre: Bedlam. signed
ISBN 9780356502137
UK 1st edition 1st impression hardback in an unclipped wrap
Published by Orbit in 2013.
The wrap is fine.
The book is near fine with the bottom rear corner bumped. It is  new and unread. Edges lightly creamed.
Signed on the title page with no other inscription or dedication.
Heaven is a prison. Hell is a playground.
Would it be your ultimate fantasy to enter the world of a video game? A realm where you don't have to go to work or worry about your health; where you can look like a hero or a goddess; where you can fly space-ships, slay dragons, yet all of it feels completely real. A realm where there are no consequences and no responsibilities.
Or would it be your worst nightmare?
Stuck in an endless state of war and chaos where the pain and fear feels real and from which not even death can offer an escape.
Prison or playground. Heaven or hell. This is where you find out. This is white-knuckle action, sprawling adventure, merciless satire and outrageous humour like you've never experienced.