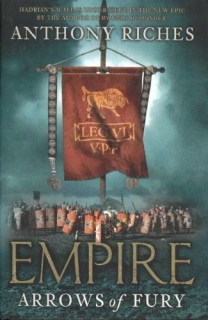 Anthony Riches: Arrows of Fury
ISBN 9780340920336
UK 1st edition 1st impression hardback in an unclipped wrap.
Published by Hodder & Stoughton in 2010.
The wrap is fine
The book is fine, new and unread.
The Battle of the Lost Eagle saved Hadrian's Wall, but the new Roman governor of Britannia must stamp out the rebellion of the northern tribes or risk losing the province. Rampaging south with sword and flame under the command of their murderous chieftain Calgus, they have stretched his forces to the limit.
For Marcus - now simply Centurion Corvus of the 1st Tungrian cohort - the campaign has become doubly dangerous. As reinforcements flood into Britannia he is surrounded by new officers with no reason to protect him from the emperor's henchmen. Death could result from a careless word as easily as from an enemy spear
Worse, one of them is close on his heels. While Marcus is training two centuries of Syrian archers to survive a barbarian charge and then take the fight back to their enemy, the new prefect of the 2nd Tungrians has discovered his secret. Only a miracle can save Marcus and the men who protect him from disgrace and death . . . 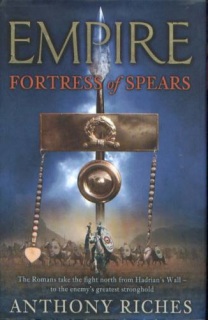 Published by Hodder & Stoughton in 2011.

The wrap is near fine with a little edge wear.

The book is fine and appears unread. Head and tail pushed.

The Romans have vanquished the rebel alliance, leaving Calgus, Lord of the Northern Tribes, the prisoner of the chieftains he once led.

But the new Roman leader will not let them rest. He forms an audacious plan to capture Dinpaladyr, the Selgovaes' fortress of spears, and return it to the hands of a trusted ally.

Marcus Aquila - burning for revenge on an enemy army that has killed one of his best friends - is part of the select group of infantry chosen to go north with the Petriana cavalry and take the fort before the rebel army can reach it. He believes his disguise as Centurion Corvus of the 2nd Tungrians is still holding.

But he is just a few days ahead of two of the emperor's agents, sent from Rome to kill him. Pitiless assassins who know his real name, and too much about his friends. 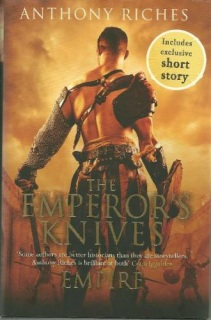 Published by Hodder & Stoughton in 2014.

The seventh novel in Anthony Riches' acclaimed Empire sequence brings Marcus Aquila back to Rome, hunting the men who destroyed his family.

But the revenge he craves may cost him and those around him dearly.

The young centurion's urge to exact his own brutal justice upon the shadowy cabal of assassins who butchered his family means that he must face them on their own ground, risking his own death at their hands.

A senator, a gang boss, a praetorian officer and, deadliest of all, champion gladiator Mortiferum - the Death Bringer - lie in wait.

The knives are unsheathed, and ready for blood . . ..